We are starting a new year, so naturally I have been reflecting over the last year — thinking about what has changed since this time 365 days ago. 2014 has been my first full year of Powerlifting. I started off the year pretty big with my first meet being at the Arnold where I took 3rd in the StartingStrength.com Pro Raw Challenge. Prior to that meet, I had never competed without cutting a few (or several) pounds. The Arnold was my first time bumping up a weight class to the 84-kg/185-pound class. I weighed in about 8-pounds heavier than my previous ‘walking around weight’ at 178-lbs and added 83-pounds to my PR Total from just 3 months prior. Pretty good trade-off, if you ask me. Going up a class made Powerlifting more enjoyable because I knew what I was capable of come meet day, instead of hitting big lifts in the gym but going backwards at a meet due to a weight cut. Since the 2014 Arnold, I have competed in 2 full meets and 2 partial meets (USAPL Bench Nationals & an exhibition pull/push).

Beginning in March of this year, I was welcomed onto the team that is Bell Power Systems, based in San Antonio. BPS is a fleet of Powerlifters that are led by the legendary Gene Bell, and not only is the crew strong, but they are truly a family unit — the squad is what is great about Powerlifting.

In late April, I competed in the USAPL Alaska State Championship, held in Anchorage. The most remarkable moment during that performance was my 402-pound Deadlift, a 32-pound PR from the Arnold (less than 2 months later), and a 66-pound improvement over my best pull from the meet I did in December 2013. There were 2 major changes that contributed to that big PR: switching to a sumo stance, but more importantly a complete overhaul in my Deadlift training. In short: volume = GAINZ.

Then comes summer 2014, which I spent in south Texas with Ryan. Activities of the summer included suffering from being overheated, training in 110 degree heat with minimal air flow, whining incessantly that the A/C wasn’t strong enough, and sweating constantly.

On a less dramatic note, the 3 months in Texas really transformed me as a lifter. First off, I had never experienced regular training partners/coaching to push me further than I would ever go alone, but also to help me brush it off when I had a bad day. My training prior to the summer was about 98% alone. That meant I knew how to keep trucking through a workout, but everything I did was pretty mellow. I did not realize how FUN training could be if you had the right people. Training with Ryan (& BPS) over the summer allowed me to meet TONS of great people that I otherwise would never have gotten to know. Additionally, I was privileged enough to prepare and compete in USAPL Bench Nationals (equipped), but the best part was being surrounded by some of the greatest Benchers in the country (and world) to help me learn the equipment and prepare for Nationals (more on this shortly).

USAPL Raw Nationals took place in Denver, CO. I took 3rd place with a 385-pound Squat, 209-pound Bench, and a 402-pound Deadlift (997-pound Total… yeah, 3 measly pounds shy of a grand). With a Wilks score of 407, I qualified to compete in the StartingStrength.com Pro Raw Challenge at the 2015 Arnold Sports Festival (Friday, March 6th). 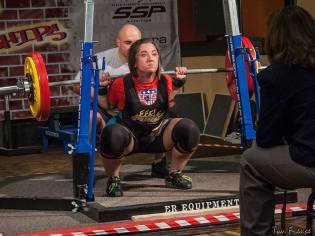 Bench Nationals was in late-August in San Antonio. I did not do as well as I would have liked — only made my opener of 303-lbs (missed 325-lbs two times). My performance did not deter me from equipped bench pressing, though. I will be competing in the Titan Pro Bench Bash at the 2015 Arnold (Sunday, March 8th). Because of the great teachers I over the summer, I can thoroughly enjoy equipped Bench training.. It is so difficult, but so exhilarating at the same time.

Unlike 2013, this year I really toned down the ridiculously busy meet schedule. It is likely that in 2015 I will have just as brief a meet schedule: the Arnold in March, Equipped Nationals in May, and Raw Nationals in October.

1 year ago (to this exact day), when I accidentally squatted 315×2 (misloaded the bar)

It feels like 2015 is going to be a big year. In my mind, I’m moving up from being a ‘new’ Powerlifter to whatever the next step up is… Perhaps it’s ‘intermediate’? Now for the fun stuff… Here is a comparison of my raw numbers from one year ago to now (the ‘current’ numbers are simply current PRs in the gym or a meet, while the past numbers are from a meet in December 2013).

I’m not going to say cliche things about my expectations for 2015 — that I’ll work harder than ever or make some big change(s). What I am going to do is continue to work my hardest, but also work smart, and to continue progressing like I have. 2015 is a big year, just like every other year in life is a big year.

“You can’t build a reputation on what you are going to do.” ~ Henry Ford